The area encompassing the Baltimore County park called Lake Roland was part of an 18th century land grant from Lord Baltimore to several Maryland families. The reservoir that is now the centerpiece of the park was formed much later in the 1850’s as a water source for the City of Baltimore and is also called Lake Roland.

By the 1830’s and 40’s Baltimore’s industrial and population growth was accelerating and established sources for supplying water had become inadequate to meet its needs. In 1853 the State Legislature authorized the Mayor and City Council to purchase all necessary land and water-rights to introduce a long-term permanent supply into the city. After the consideration of many surveys, plans, projections and estimates, the choice of six sites rested on the Jones Falls Valley or the longer distanced Gunpowder River. 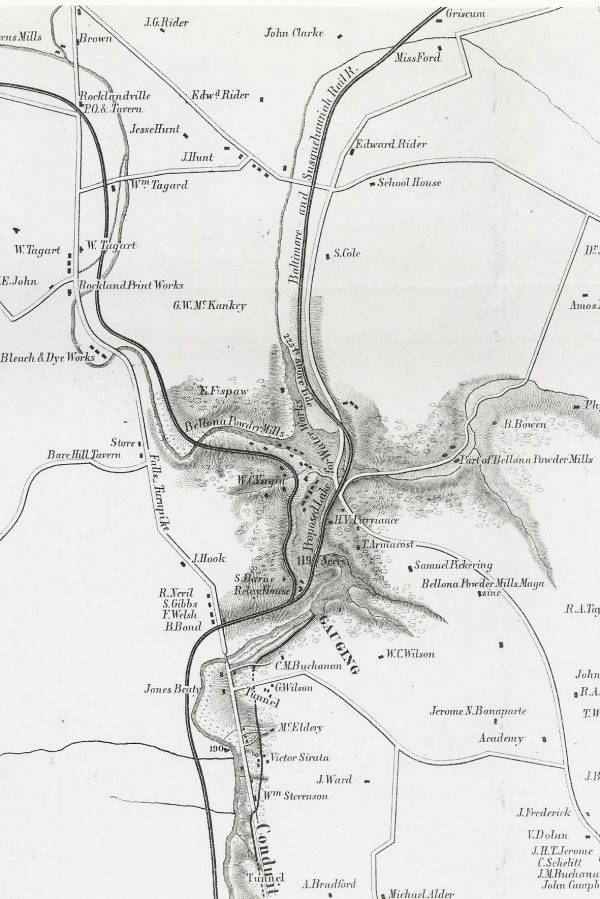 T.E. Sickels, a highly respected civil engineer, was contracted to survey both options and make a formal recommendation to the Mayor and City Council. A year of intense study and field work followed during which a complicated mathematical formula was used to measure the water flow of both Jones Falls and the Gunpowder.

The Jones Falls was measured where the light-rail now crosses the lake using a flume 45 feet in length and 25 feet in width through which all the water passed and was measured twice a day during the summer. The results showed an average flow of 8,297,238 gallons during a 24-hour period against a projected need of 13,000,000 gallons that the city would require by 1880. Thus, in his 1854 report, Mr. Sickels stated:

…..No practical method of securing this amount of storage could be seen having reference to security and reasonable cost and …. Regarding this stream as therefore wholly inadequate to furnish an abundant supply of water to the City of Baltimore, it was deemed unnecessary to present estimates of the cost of introduction…..

Mr. Sickels went on to recommend that the cost of procuring seventy million gallons of water from the Great Falls of the Gunpowder as the best plan and would satisfy the city’s needs for the indefinite future. Unfortunately, in the case of the City or fortunately in the case of current residents of the area, Mr. Sickels’ recommendation was dismissed as too visionary and expensive for the City to embrace at one time as the cost was considerably more than the Jones Falls option which was then promptly undertaken.

The surrounding community has benefited greatly over the years as a result of this naturalist oasis even if it has fallen into neglect. In 1874 only a decade after Lake Roland was completed, the Gunpowder River supply was authorized. In the meantime, a 36-inch pipe was laid out for 3½ miles between Merediths’s Ford on the Gunpowder and the Roland Run stream at Lutherville to augment Lake Roland’s supply. The feature is shown on the 1876 Hopkins’s map of Baltimore County so the Lake Roland supply would be adequate until the new source was available.

The Lake Roland project was a short-lived solution, with strong political overtones, to a long-range challenge the City and indeed all expanding metropolitan areas had to face as farm population migrated to the cities seeking employment in the emerging industrial age. But the foresight of Baltimore’s progressive leadership that followed the Civil War prevailed and the Gunpowder system put in place just a few years later has served us well for over a century. Wisdom delayed is wisdom nonetheless.

There were many other challenges faced in planning a thriving city’s future for generations to come in health, safety, architecture, construction, traffic, recreation, utilities, infrastructure, etc. In the later part of the 19th and early 20th century Baltimore was at the forefront of modern urban development.

In the 1940’s the land surrounding the lake was consolidated by Baltimore City to form Robert E. Lee Memorial Park, with its 450 acres of woodland, wetlands, serpentine barrens, rare plants and rocky plateaus. In 1992, most of the park was declared a National Historic District — the Lake Roland Historic District — in recognition of its many historic elements, including the Greek Revival pump house, the dam and structures from the Susquehanna & Baltimore Railroad (later, the Northern Central Railroad). 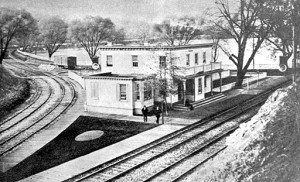 Looking north from the western bluff of “dogwalkers’ peninsula” in the Park toward the main body of Lake Roland. Photo courtesy Baltimore County Public Library.

The former Northern Central Railway (NCR) line in the foreground is now used by the Baltimore area Light Rail system (having been relaid). The line to the left is the Greenspring branch of the NCR, which was also used by the Western Maryland Rail Road (WMRR) to connect trains to its station at Owings Mills. This branch trackage, despite falling into disuse decades ago, is still extant, if overgrown, running from near this vantage point about a mile around the western shore of the lake before petering out. Of the station building shown here, there is now barely a trace. The Relay House, or Hollins Station, at Lake Roland is pictured in a Sun rotogravure section reprinted in the 1950s. Lake Roland is at back with bridge at right. The station, which served the Greenspring branch of the Northern Central Railway, was closed in 1926 and destroyed by fire in 1933.